Guilin North Station is on the junction of two railway lines that connect the southwest and Zhujiang Delta in the south. The station was constructed in 1998 and undergone upgrade in 2014 to suit for high speed trains. It is now serving high-speed trains from and to Beijing, Shanghai in the north, Shenzhen, Guangzhou, Hong Kong in the south and Guiyang, Kunming, Chengdu, Lijiang in the southwest.

The station consists of a two-storey building and a front square. There are 28 escalators and 8 barrier-free elevators inside the station. 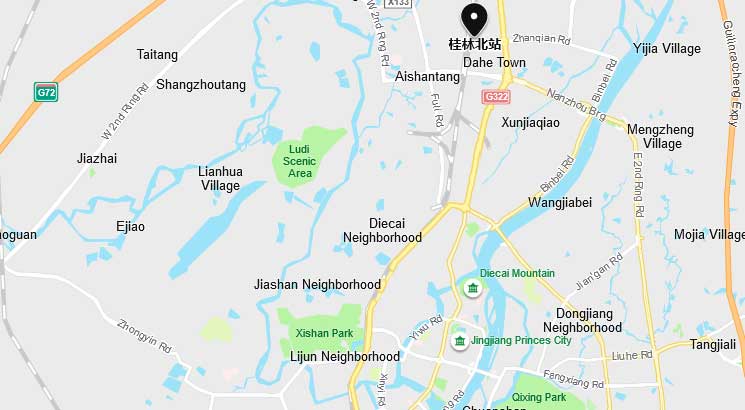 Guilin North Station is about 8 Km away from downtown and 10 Km away from Guilin Station with Taxi ride around 30 minutes at most of the time.

Public buses No.100, 1, 302 and 32 are frequently operated but to different districts of the city. Don’t expect for subway. It is reported that the Karst topography makes it difficult to build subway lines.

For transit travelers, the airport shuttle and tourist bus to Yangshuo might be the right thing you are looking for. If you are travelling with family or friends, the nicest option is car rental or bus charter.

Thanks to the opening of High-Speed rail, Guilin becomes the transportation hub of Southwest, Central South and South China by connecting Guangxi, with Hunan, Guizhou, Guangdong provinces. It takes only 3 hours to Guilin from Hong Kong, Guangzhou, Shenzhen, Guiyang, Changsha, and about 10-12 hours to the metropolis Beijing and Shanghai. View a full list of departure trains from Guilin North Station.