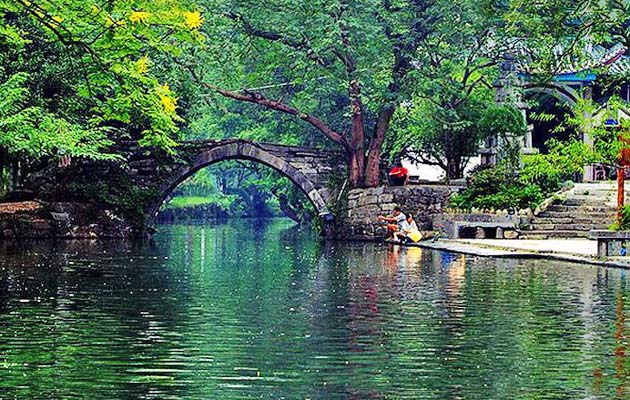 1. Lingqu Canal - the first canal in the world with history over 2,000 years.

2. Jiangtou village - the 800 years old village has the largest and best-preserved collection of buildings in Guangxi Province.

This culture day tour takes you from Guilin to the barely visited relics in the northern parts of Guilin, including the world’s first Canal construction, a boat cruise, and ancient town of Jiu Wu village.
Itinerary

Most of the tourists focus their trip in Yangshuo and Xingping in south of Guilin. This tour showcases you the barely visited ancient relics in norther parts of Guilin city. Highlights include the Lingqu Canal construction, a boat cruise, and ancient town of Jiu Wu village.

The Lingqu Canal is located at Xingan County, 76 km north of Guilin. It was the first canal in the world to connect two river valleys and enabled ships to travel 2,000 kilometers from the latitude of Beijing to Hong Kong. Ling canal completed in 214 BC and the main structure keeps the same looking as it was. It has been on the list of UNESCO World Heritage Sites and truly a hidden gem in the area.

Its total length reaches 36 km and we will visit the main structure that the two river meets. Afterwards, we take a boat ride through the park to the town center where old buildings, museum and minority culture center standing along the banks.

After lunch, drive back to Guilin and visit Jiangtou village in the suburb of Guilin. With a long history over 800 years, the village has the largest and best-preserved collection of buildings in Guangxi Province. There are still more than 620 ancient buildings and most of them were built in Ming and Qing Dynasties. The ancient wells, slate alleys, stone arch bridges, exquisite wooden carvings on windows and doors are sparkling and showcasing the former glory.

Transfer back to your hotel in Guilin city around 5:30.

1.  No stop at any shopping center.

2.  Pick-up and drop-off hotel or personal address is supposed to be in the city. Meet up time at hotel can be a bit earlier or later.