Hohhot was founded in 16th century and became the capital of Inner Mongolia Autonomous Region since 1954. In the long history, it was the frontier city and a trading center between the Nomads and Han people. Indigenous Mongols takes up around 11% of the city's population, then the Mongolian culture and Mongolian Buddhism is actively preserved. The biggest event is Naadam Festival held annually in July that showcases many traditional activities like horseracing and wrestling. It is also a big draw for visitors. Being a city on Mongolian Plateau, Hohhot is nothing with "hot" but a cool resort in northern China. It is surrounded by vast grassy lands and magnificent desert. The places are now tourist friendly facilitated with Yurts hotels and luxury resorts. The most visited sights are Xilamuren Grassland and Xiangshawan at Kubuqi Desert. Beyond that, in and around Hohhot are dotted with cultural relics like Da Zhao Temple, Temple of the Five Pagodas, Tomb of Princess Zhaojun and Genghis Khan Mausoleum. Plan your escape from Beijing with bullet train ride or flight travel from many big cities in China. We have Hohhot city tours and long vacations from Beijing as well. Check this page to learn more. 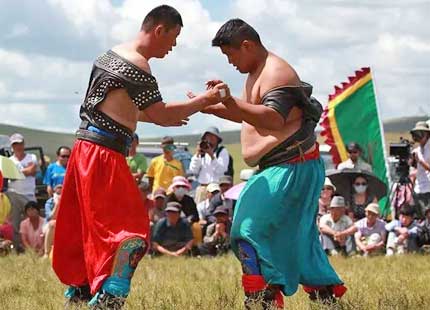